Some of the specialty chemical processes at a major chemical manufacturer’s plant result in considerable HCl loading in the off-gas. The HCl must be removed before the off-gas can be discharged to the atmosphere. Production of saleable by-product HCl solution was an important goal when looking for a high-efficiency HCl removal system.

The company wanted to achieve a very low level of emissions, aiming at 5 ppm. Design criteria included normal airflow of 60 scfm, peaking to a total flow of 240 scfm of HCl and air at various concentrations. The gas stream temperature was specified at l10°R The HCl was to be collected in a saleable form, preferably at 31.5 to 32% by weight concentration.

Some of the designs involved bubbling the gas stream through water. This was looked upon as simplistic and unlikely to achieve a very high rate of removal. Unaccompanied packed towers were suggested, again indicating a lack of familiarity with the plant situation. While towers can be a useful part of a steady-state HCl production process, experience indicated they weren’t reliable with the plant’s changing gas composition: quick, high peaks, dropping off to negligible rates in a short cycle. 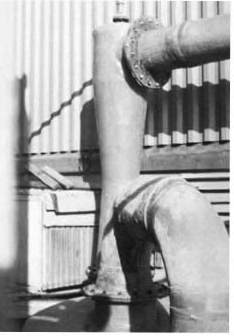 Jet venturi fume scrubbers were considered an excellent choice to handle load fluctuations. Two in series allow for recovery of over 98% of the HCl and provide backup for each other. The units are all nonmetallic for corrosion resistance, with fiberglass-reinforced plastic (FRP) bodies and polyvinyl chloride (PVC) spinners.

The jet venturi fume scrubbers bring liquid and gas streams into intimate contact. HCl transfers from the gas to the liquid where it dissolves. A plate-and- frame type heat exchanger in the first stage recirculating liquid line removes the heat generated from dissolving the HCl.

The tailgas scrubber consists of two identical counter-current packed towers mounted on a single storage tank. Like the venturis, the towers, tank and ductwork are all made of FRP. The tower packing and the mist eliminators are made of polypropylene. The final stage packed towers provide very high efficiencies for the removal of the small amount of remaining HCl.

Results: The jet-venturi/packed tower system is performing exactly as expected. It has been on-line since the fall of 1989. Final emissions from the scrubber are monitored continuously with the use of a gas detection system. Concentrations are typically at 2 ppm. The units are virtually maintenance free.

The recovery of saleable HCl with the jet venturi fume scrubbers and countercurrent packed towers has offset the cost of the system. In two years, the system will have paid for itself. Liquid waste production has been minimized.