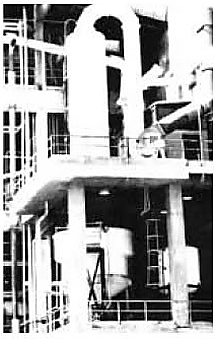 The Great Northern Paper Co.’s mill in Millinocket, Maine, produces about 500,000 tpy of paper for telephone directories, magazines, almanacs, business forms, catalogs, and school workbooks. Pulp is produced in the form of chips, using the sulfite chemical process. The chips are cooked in a magnesium bisulfite solution in batch digesters at specific temperatures and pressure. When the pressure builds up beyond the required level during the cook, and when the cook is completed, the steam and chemical gases must be vented.

During normal operations, these emissions are recovered by the mill’s chemical recovery process. Routine maintenance of the recovery system is, however, required because of chemical precipitation and scaling problems. This requires shutdown of parts of the recovery plant about once every three weeks for several hours. In addition, four times a year the plant is closed for more extensive maintenance. During these periods, another system is needed to capture the water vapor and noncondensable gases, notably sulfur dioxide, to conform to ambient air quality standards.

To obtain maximum sulfur dioxide removal efficiency, Great Northern, in consultation with the Clean Air Group, LLC decided on a two-stage scrubbing operation using two jet venturi fume scrubbers. The units condense the steam and then scrub the sulfur dioxide with no fans or other moving parts, thus ensuring a longer troublefree operation period. In this application as a supplement to the usual recovery process, the scrubbers capture the emissions but do not recycle the sulfur gases, as does the primary recovery system.

The emissions vented by the batch digesters are composed of 90% steam and 1 0% noncondensable gases, mostly sulfur dioxide. In the first stage of the process, the venturi emits a water spray which, in contact with the gases, condenses the steam. The gas and liquid advance into the separation unit where the now condensed vapor and liquid fall into a collection vessel and are ultimately discharged.

With 90% of the emissions removed by condensation and most of the heat dissipated, the highly concentrated sulfur dioxide gases are then drawn into the second and smaller venturi scrubber. The nozzle ejects a caustic (sodium hydroxide) solution spray causing a draft that draws the gases into the stream. This provides continuous scrubbing and adsorption of the sulfur dioxide. The use of a soluble caustic solution reportedly prevents any fouling problems.

The separator uses a mesh-type mist eliminator that allows the small amounts of non-sulfur-dioxide gases to be vented to the atmosphere without mist carryover. As the sulfur dioxide is absorbed by the sodium hydroxide, the pH of the caustic solution is continually monitored and restored by a standard pH control. Small amounts of the weakened solution are allowed to overflow.

This double-stage application provides sulfur dioxide absorption by first eliminating the high-temperature steam that makes up 90% of the emissions. The second-stage scrubber can therefore run cooler, which contributes to more efficient gas absorption. It also avoids dilution of the scrubbing solution with condensed water.

The choice of stainless steel as the construction material was based on the needs for compatibility with high temperatures and maintenance convenience. Because employees were trained and experienced in the maintenance and repair of stainless steel, Great Northern chose it over fiberglass, even though the cost was greater.

The use of two venturi scrubbers in series reportedly offers a highly efficient method of eliminating sulfur dioxide fumes when the normal recovery process is not in operation.